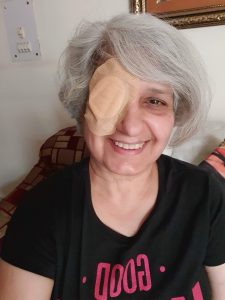 One not so fine day I was told that both my eyes  had developed cataract. It was March 2021 and I was only 57 years old. I remember my mother’s eye surgery when she had turned seventy. I asked the doctor to reconfirm and he said it’s not a big deal many people get this even at the age of fifty.

My dentist who is 51 years old had cataract surgery a few months ago. He assured me it was a breeze and he was back in his clinic after 3 days. He opted for multifocal lenses so that he could see better and read without glasses. After speaking to the counsellor and my ophthalmologist  I decided to go in for mono focal lenses because they are a hundred percent effective and there is no blurring at the edges, no halos.

I am a scaredy-cat and afraid of anything to do with hospitals, my father wanted me to become a doctor;). My daughter had got her LASIK surgery around 10 years ago when she was in her 20s. She explained the steps of the operation and the workings of the laser machine.

I will take you through my diagnosis to surgery as much in detail as possible.

The first time I went to the eye hospital for a check up was in March 2021. I had been stumbling about the house and tripping on the roads a lot more than normal and my husband noticed it even before I could. He insisted we go for a detailed check up and I humoured him.

After the registration and an initial eye checkup Started the eye drops marathon. The nurse put eye drops in both my eyes and asked me to sit with my head elevated and eyes closed. After every 15 minutes or so she repeated this process and about 4 times later we were ushered into the doctors room. My eyes had dilated fully by then. My husband had also decided to get his eyes checked to reassure me it was painless.

We went in and I was the first one to get my eyes checked. The doctor explained that the cataract in both my eyes was almost 90%. My left eye was worse off. I was shocked 😮. My husband on the on the other hand was cataract free 🙂 which threw me off, since he is a year older :).

I was advised surgery at the earliest but my state of mind prevented me from setting a date then. After coming home I did a lot of reading online, spoke to doctors, my family members and after a couple of weeks decided to get the left eye operated upon. My mother told me about her painless cataract surgery, my daughter-in-law and daughter shared their experiences with LASIK to reassure me. I put up a brave front and agreed to get my laser surgery done.

The date for surgery was 13th April, my friend Sukhi’s birthday. It was a good omen as she is a dear friend and the most amazing person I have met. Both my brothers and my niece celebrate their birthdays on 13th of different months. I saw it as a sign of good luck.

I was asked to have a breakfast of poha or something light on the day of my surgery. They checked my blood pressure and sugar readings and pulse rate again before the surgery. The eye drops were administered for three times after a gap of 15 minutes each before going up to the third floor, the operation theatre. Until then I was fine as my husband was with me but this point on he wasn’t allowed to accompany me. My legs started shaking and hands grew cold. I didn’t want to go with the nurse and held back. Viki told me it was going to be fine and wished me luck. I stumbled into the lift and started chanting the mantras. All the ones I knew, Gayatri mantra, Mrityunjay mantra, Ganesha mantra,….etc.

Another healer friend had sent me a sacred number which I had written on my arm, I recited that 7 digit number throughout the time I was waiting for the operation to commence. On the 3rd floor again they put eye drops in my eyes, twice. After about 30 minutes the doctor came to check the dilation and called me in to the laser room.

I don’t know about you guys but I am a scaredy-cat when it comes to medical procedures. I remember the times when I had to go for repeated FNAC tests in the past, almost 8 times in a year. The thought of the needle going into my thyroid gland was enough to freak me out. But I went through the tests but I was never alone. My husband accompanied me, and on days he wasn’t around, my good friends were there to give me moral support and mental strength. This time I was alone in a room with the doctor and his assistant.

As I lay on the table with the laser attached to its head, I prayed. They attached a gel cup to my left eye and asked me to look into the lens of the laser machine. I saw lots of colours, at first it was like reds, greens, yellows like fireworks and suddenly a bright green and red burst of sparkles happened and lot of cool liquid was poured into my eye. The laser was done within minutes. I was relieved, this is easy, I thought to myself.

The nurse held my hand and led me to the operation theatre where the doctor was going to insert the lens into the cut the laser had made in my eye. Sounds scary, right?

I took deep breaths during the 15 odd minutes it took the doctor to remove the cataract and insert the lens. The doctor was all praise for me and my composure during the surgery. The nurse put a thick bandage on my eye and helped me down to the waiting room where Vicki was waiting anxiously. He knew I was terrified.

The same thing happened with my right eye in August but there was a slight change in the procedure. While lying on the operating table I lost it. When the doctor was removing the cataract and the machine was switched on to suction it out. I couldn’t breathe. It didn’t help that I was wearing two masks and another towel was placed over my face for the operation.

When I started fidgeting the doctor asked me what the matter was. My shaky response was, could someone please hold my hand?

The nurse held my hand and I squeezed it as tightly as I could. She asked me to relax but I had started the wild descent into panic mode. I tried to remove my mask, the nurse said not to move and that she would do it for me. I could breathe fine after that and profusely apologised to the doctor and the nurses. I was mortified at my behaviour and wondered why the panic attack didn’t happen the first time, why now?

I am glad it happened during the second operation otherwise I am sure my other eye wouldn’t ever see the light of the operation theatre ever. 🙂

11 thoughts on “My cataract surgery”