This post is my entry for  100 Words on Saturday! 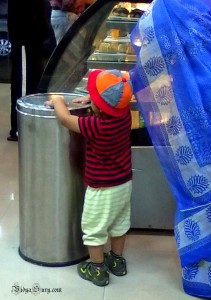 If rubbing a tiny magic lamp brings out a giant genie, Yash wondered who would appear out of the huge dustbin, to grant him his three wishes. He was desperate to talk to his genie, as he had an urgent request from his friend, Mohan, to discuss.

Ever since Yash had started accompanying his grandmother to the community library, in the evenings, after coming back from play, his imagination had multiplied many-fold. He liked making up stories to share with his friends.

His grandmother’s love for books had been passed down to him. He was going to be a writer.