Authors note: This is the Fifth chapter of week 3 in the “Game of Blogs” for the team “Bards of the Blogosphere.” #CelebrateBlogging To read the previous chapter, click here

“Ha! As if! No, Roohi has to die”, his voice was as steady as his hand holding the gun. “And so do you”, he looked over his shoulder at Jenny, his eyes daring her to shoot him.

Roohi gasped in fear and covered her mouth with her trembling hands; she first stared at the gun pointing at her, and then at the man’s face. Why was he trying to hurt her?

It was as if he had heard her unspoken thoughts, for his next sentence seemed to answer her baffled question.

“You are just an unlucky little girl, who was in the wrong place at the wrong time. I don’t have any enmity with you, but you have seen me, and so I cannot let you live to identify me. You are an innocent bystander who will have to pay with her life for the cruel joke that life has played on you. Both you and your photographer friend face a similar fate; I have to kill you both in order to survive.”

The intruder went on with his monologue, unmindful of the effect his words had on his listeners. It was as if he was in a state of suspended reality. He casually waved Roohi towards her parents’ room and smiled when she scurried past him and into the waiting arms of her mother.

“Isn’t it the best feeling in the world, holding your child close to your heart?”, he smiled wistfully and pointed the gun at Tara as he waited for her to answer. Jenny still had her gun trained on Ahuja, she hadn’t moved a muscle ever since she had seen Ahuja standing in front of Roohi, scaring the kid nearly to death.

Tara and Roohi grasped each other’s hands involuntarily upon hearing his threatening and spine chilling question, while Shekhar put his arms around them. Their daughter was in grave danger unless he came up with a plan to save her.

“Roohi, why did you sit next to me at the conference at Kochi? You recognized me, we had met at the park where my Dragonfly used to play with her friends.” He swallowed shakily before continuing, “Do you… remember my Priya? Why did you wander off in to the grounds later and see me escaping out of the window, with the minister’s blood on my clothes?”

Aryan Ahuja walked around the room while recounting his story, lost in his thoughts, and confident in the knowledge that Jenny would never put Roohi’s life at risk by shooting at him. As long as he had the Duttas in his firing range, Jenny’s hands were tied. They all held their breaths and looked at Ahuja and each other with fearful eyes.

“And Jennifer, you are a thorn in my side. Your friend Cyrus was stupid enough to trust the snake of a minister and didn’t think twice before handing over all the evidence to him. The human trafficking organization is not a small operation; it is a well planned, deep-rooted and politically controlled one. Now you are also involved in this mess, your persistence and dogged pursuit of the truth has led you to Dutta’s house and their daughter Roohi. I am sorry but I have to wipe out all evidence and get away from here, your lives will mean my death and I am not ready to die, yet.”

Aryan Ahuja sounded more sad than angry; with his soft and cultured voice. He didn’t speak like a hardened criminal, more like an anguished man, and that piqued Jenny’s interest. The journalist in her wanted answers; he was an unsolved puzzle and she momentarily forgot her fears while trying to think of reasons for his behavior. Why was this polite and sophisticated man talking about killing innocent people so casually? What had led him to this state?

“You know, I had a daughter, her name was Anupriya.” His voice broke while speaking about his daughter, “I have been running from pillar to post, looking for her but haven’t found a tiny clue to her whereabouts. She was taken from me when she was just 10 years old. My baby was kidnapped from school and I fear that she was sold by human traffickers into some brothel in the red light area. My Priya… my little dragonfly.”

His voice trailed off, almost like he had fallen asleep recounting his heartbreaking tale.

“Papa, have I told you lately how much I love you?”, Priya’s smiling face was turned towards him and her eyes were twinkling with mischief and affection.

“No, my dear, you haven’t. Come to think of it, it has been a while since you baked a cake for your poor old father”, he had quipped.

“Okay, from now on, I promise to bake you a cake every Sunday and go for a morning walk with you on holidays too”, she had a hidden agenda and he was determined to get to the bottom of this puzzle as soon as possible.

“What do I have to give you in return for these favors? Is it more pocket money that you are after?”, he had smiled and ruffled her hair.

“No, I am perfectly happy with the pocket money you give me every week. I just wanted to get a dragonfly tattoo on my hand, my friends have got tattoos and they say it doesn’t hurt much.”

He had stared at Priya; she was a ten year old little girl. When did she become interested in tattoos? And who had taught the finer nuances of negotiation? She gave him imploring looks and there was a hint of moisture in her pretty eyes. He didn’t have the heart to say no to her, but he made her promise something in lieu of allowing her to get the tattoo.

“I will let you get a tattoo only if you promise to study hard and attend school regularly, no more French holidays, okay?”

He remembered the impromptu poem they had written about the dragonfly tattoo and how they had danced around singing it, waving their arms and shaking their heads.

Reaching high for the sky

The ringing of the phone brought him back to the present; and he was startled to find himself amongst three frightened Duttas’ in their living room. He quickly turned towards the kitchen where the phone was ringing and stumbled in the dark.

Tara had fished out Shekhar’s cell from his jacket’s pocket when Ahuja had been engrossed in telling them about his daughter, his anguish had made him lose sight of the fact that his hostages were more in number and desperate enough to try anything to save their child . Tara had called up their landline and had anticipated Ahuja’s momentary confusion at the sudden ringing sound coming from the kitchen.

She saw her chance to escape and save her daughter when Ahuja was staggering about trying to get his bearings; she pushed Roohi towards the main door and yelled ‘Run’. Jenny picked up Roohi and ran out of the room, Shekhar and Tara followed closely on the girls’ heels and tried to get out of the house and away from Ahuja but he recovered quickly and grabbed Tara’s arm as she ran past him.

Shekhar heard her scream and tried to help her get away from Ahuja but even before he could open his mouth to reason with him, felt a sharp pain in his stomach. It felt like someone had poured hot lava on him and he fell to the floor.

Ahuja stood over him with a smoking gun and Shekhar realized the searing pain was the wound inflicted by the bullet. Thankfully, Tara, Jenny and Roohi had run out of the house and were safe. He clutched his stomach and lay writhing on the floor, his blood slowly seeping out of his body… 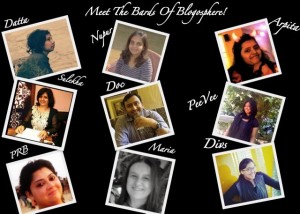 The Story so far

Week 2:
Chapter 1 – I’m coming to get you, Princess
Chapter 2 – The evening before
Chapter 3 – A Good morning
Chapter 4 – Trigger happy
Chapter 5 – The Calm before the storm
Chapter 6 – What lies beneath
Chapter 7 – Pandemonium
Chapter 8 – Whodunit?
Chapter 9 – Divulgence

Week 3:
Chapter 1 – Shadows in the Night