Authors note: This is the Eighth chapter of week 2 in the “Game of Blogs” for the team “Bards of the Blogosphere.” #CelebrateBlogging To read the previous chapter, click here

Unaware of the impending doom, Shekhar and Tara took their darling daughter back to their hotel room. Kochi, the queen of the Arabian Sea, had lost all its charm for this nuclear family from Mumbai and they made arrangements to fly back home to safety and sanctuary, away from this danger and chaos.

“Shekhar, Roohi hasn’t spoken a word since you found her lost in the crowd at the conference hall”, Tara’s normally stoic demeanor was shattered and she was almost wailing with concern for her daughter’s well being. Her hands trembled while packing Roohi’s clothes in their overnight bag, a pink scarf fell on to the carpet.

Shekhar bent to pick it up and tried to compose his features before straightening; he had to be strong for his family’s sake, Tara shouldn’t see him looking worried and almost on the verge of panic.

“Please stop making such a fuss, Tara. You are making her even more anxious with your hysterical behavior. She is scared because she was separated from us for a while back at the conference hall, she will become normal in some time. Children are very resilient, they bounce back faster than a rubber ball”, Shekhar tried to inject some humor in to this terrifying scenario. He didn’t let on but he was equally concerned about his little princess and her stricken face was driving daggers into his heart.

What had happened out there to make her this terrified? What had she seen? What was in store for his precious family? 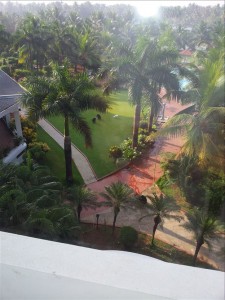 The plane took off from Kochi airport and the Dutta family heaved a sigh of relief, Roohi looked relieved and more like her old self while tugging at Tara’s sleeve,

“Mummy, I am thirsty”, these were the sweetest words Tara had heard since the incident at the hotel.

“Darling, what do you want to drink? Should I ask for a juice for you?”, Tara pressed the switch overhead to call the airhostess to their seat.

“I want orange juice and I’d like some chips too, I am suddenly so hungry”, there was a hint of a smile on Roohi’s lips and Tara smiled back involuntarily, her eyes seeking Shekhar’s over Roohi’s head. The relief reflected clearly for him to see and reciprocate.

Maybe all was going to be okay now that they had left the traumatic events and the place behind. Maybe Roohi will tell them one day, what she had seen and why she had been so scared.

Meanwhile in Kochi a distraught and bewildered Jenny sat holding her head in her hands, spent after a good cry, and muttering to herself,

“Cyrus cannot kill anyone; he is not capable of harming another human being. I know my CY. He is innocent; I know he is not the killer as the cops are making him out to be.”

She remembered how just yesterday she had walked with him on the beach, the dinner in his hotel room, the kiss and the night of passion. His softly uttered “I love you”, the next morning. How happy she had been on seeing him after so many years and how his nearness had affected her senses, brought her back to life. She’d wanted nothing more than his nearness, his loving gaze on her face and the warmth of his affection thawing her dormant emotions, she loved him. And now he was in danger, falsely accused of a murder he didn’t commit. She had to help him! At any cost.

Another thought crossed her mind, an image flashed before her eyes; it was the screen of his laptop with TMJ displayed on it. Tamso Ma Jyotirgamaya, wasn’t it Cy’s blog? She remembered Cy telling her about it,

“TMJ stands for Tamso Ma Jyotirgamaya. You know Jenny what it means. It means lead me from darkness to light. I have worked very hard on it for last two years- a lot of primary research, investigations and interviews have gone into it. It’s like my field diary.”

Cyrus had spoken about a meeting with the minister after his speech at the conference, he had some proof he’d wanted to show the minister. Maybe those who had a lot to lose by Cy’s disclosure silenced the minister and pinned the blame on poor unsuspecting Cy.

Maybe someone didn’t want this information to exchange hands – maybe they were unable to stop it – then there would be no choice but to make sure the minster would not interfere – he had to be silenced – perhaps even taken out of the equation entirely. Murder! The motive! It had to be! This only left one loose end. Cyrus! Her poor innocent well-intentioned Cyrus! She had to save him.

Jenny flipped open her phone and called a number she knew by heart, “Uncle, I need a favor”, she then went on to explain to him about Cyrus and everything he had told her the previous day. By the time she disconnected the call, she was smiling, slightly, and there was a glimmer of hope in her sad eyes.

The next day she reached the jail and the Inspector in charge escorted her courteously to Cyrus’s cell. Jenny’s heart went out to Cy, his hair was disheveled, shirt crumpled and eyes red with lack of sleep and worry. His eyes lit up on seeing Jenny and he rushed to the bars of his holding cell, “Jenny, I’m being framed”.

Jenny tried to tell him that she believed him but Cy didn’t give her a chance to speak and continued with his frantic explanation.

“ I swear I didn’t kill the minister, when I left the room he was alive and I heard him scream so I went back in and found him lying on the floor, dead.”

Jenny’s eyes brimmed over listening to him plead his innocence, Cyrus couldn’t tell whether she believed him or not but the fear of losing her again made him continue trying to explain his innocence.

“I know Cy, you don’t have to defend yourself to me. I love you and know you very well; you can’t even hurt a fly. I am sure someone who was involved with the human trafficking organization felt you were zeroing in on them and wanted to escape getting caught, has committed this crime.”

“There was a man in there who ran off on seeing me.. .Oh my god, Jenny! I am sure he is the killer and I know I have seen him somewhere before today.”

It was just as Jenny had suspected! “You were cleverly framed but don’t you worry, I will do everything in my power to get you out of here and also have these charges dropped.”

“But Jenny, how did you manage to meet me without bringing in a lawyer and why did the Inspector himself escort you in here? Are you some sort of Secret spy or working for the CID?” he said incredulously.

“I wish”, said Jenny ruefully, “It’s all thanks to Menon uncle, I will tell you all about him once you are out of jail and the real killer is caught. Our top priority now is to get you out of here, so let us revisit the conference in our heads and see if something strikes a chord. Better still, I have hundreds of pictures I clicked at the venue; maybe the killer is in one of them.”

“Jenny, I am sure I have seen that man earlier too. Do me a favor and go to my room and check my laptop, search in my blog TMJ’s drafts for the blog post about busting a human trafficking organization, where I have posted some photos and videos of interviews from brothels, police remand home etc. That man’s picture is in one of them, not alone but in a crowd”

As Cyrus had suspected, there was a picture of a crowd at an event a couple of months back and a man’s face held Jenny’s attention, she couldn’t breathe. She froze with shock momentarily but then frantically started going over the pictures she had clicked at the conference just before the minister had been murdered. She stared at a picture for a long time and whispered one word

Somewhere faraway, deep in the woods, sat a man rocking himself to sleep, his soft voice echoing in the dark

Forgive me, I have failed you.

You singed your wings,

Flying too close to the flame,

and I wasn’t there to protect you.

I heard your laughter fade away

Imagining your eyes dull with pain

I long to hold my dragonfly

Safe in my aching arms again.

To read the next part of the story click here

The Story so far-

Week 2:
Chapter 1 – I’m coming to get you, Princess
Chapter 2 – The evening before
Chapter 3 – A Good morning
Chapter 4 – Trigger happy
Chapter 5 – The Calm before the storm
Chapter 6 – What lies beneath
Chapter 7 – Pandemonium
Chapter 8 – Whodunit?

11 thoughts on “Bards of The Blogosphere – Whodunit? Week 2- Chapter 8”