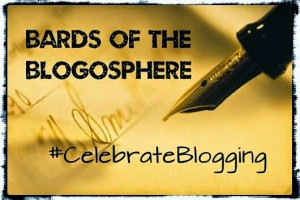 Please Note: This is the eighth chapter in the “Game of Blogs” for the team “Bards of the Blogosphere.” #CelebrateBlogging

Read the previous part of the story here

While Jennifer slept like a log, the turmoil going on in Roohi’s mind didn’t let her sleep at all.

Roohi dared to open her eyes only when she’d heard the door click shut after Jenny. They were like that of a deer caught in the headlights; scared, terrified and surprised. She had seen the same tattoo on the armed man’s wrist in her school bus. He had come to kidnap someone in their class but was chased away by Ramesh’s quick thinking. Jenny had the same dragonfly tattoo on her wrist, how come I didn’t notice it before tonight? When Roohi tried to think of the reason for not noticing Jenny’s tattoo on earlier occasions, she realized that Jenny always had her arms covered in full sleeves. Tonight, she had been so engrossed in teaching Roohi the shadow puppets that she had let down her guard, and taken off her denim jacket, dropping it on the bed, and thus exposing her tattoo to Roohi.

Oh no! Jenny has the same tattoo on her hand as the one that bad man had. The one who tried to take me away with him from the school bus! Is Jenny also a bad person? Why has she come to our house? Is she planning to try and hurt me?

All these questions kept Roohi awake through the night. She was too scared to open her door and go to her parents’ room in the dark; she was sure Jenny was waiting for her outside.

Oh no, she is alone with me in my room, what if she decides to take me with her from the back door? I must warn my parents, they don’t know anything about her and the tattoo. She could be just like that horrible man! He also had the same dragonfly tattoo!

Roohi rushed out of her room and scampered down the stairs, almost tripping over her nightgown’s hem in her haste to reach the sanctuary of the kitchen.

“Careful, my dear, you might hurt yourself. What’s the rush? I have never seen you so eager to get to school,” Shekhar’s mirth evident in his words. Though he was smiling, his eyes had that watchful look. Ever since the kidnapping incident at the bus stop, he had been keeping a close eye on Roohi. He couldn’t let anything happen to his little girl, but at the same time he didn’t want her to disrupt her routine. He made sure he dropped her off to school and picked her up every day, no more going by the school bus for her.

“What will my princess have for breakfast today?”

Roohi opened her mouth to tell him about the dragonfly tattoo on Jenny’s hand but in walked Jenny at that moment. Roohi gasped and kept quiet, her interest captured by the intricate design on the table mat, or so it seemed.

What’s wrong with Roohi? Why is she acting so strange?, thought Shekhar, giving her downcast eyes a puzzled look.

“Princess, what is daddy asking you? Should I make you an egg toast?”

Roohi twirled her hair around her finger and looked at Shekhar without saying anything; he felt a cold hand grip his heart. Something was definitely wrong, he remembered the times when he had seen Roohi twirl her hair- once when she had broken the lamp in the living room with her rubber ball, another time when she had lost her new tiffin box in school and the most recent one was when she had seen their neighbor’s son beat their pet dog with a stick. Roohi was a sensitive child and she had this coping mechanism when things got too much for her innocent heart to handle.

Jenny ruffled Roohi’s hair and answered for her, “She will have that egg toast, I know she loves it.”

Roohi flinched, barely, but Shekhar noticed the imperceptible movement and came up with a brilliant plan.

“Jennifer, will you be a dear and get me some eggs and another loaf of bread from the store across the street? We are all out of eggs and I want to surprise Tara with her favorite breakfast, I promise to make some yummy toast for you too”, he smiled at Jenny and she willingly agreed to run this seemingly innocent errand.

Shekhar locks the door after Jenny and picks Roohi up and rushes into the bedroom where Tara is getting dressed for office.

“What are you two doing in my room? Why isn’t she dressed for school yet?”

“Tara, I think Roohi has something to tell us.”

“Mummy, Jenny has a dragonfly tattoo on her arm, just like the one that bad man, who wanted to hurt me, had on his hand. I am scared mummy.”

Shekhar and Tara were stunned to hear this and they looked at each other helplessly, each trying to come up with a plausible explanation to placate their frightened child.

“Jenny can’t be a bad person, Roohi. Remember she has a little girl your age, her name is Caroline and she used to study in your school. I have seen her picture on her dressing table”, Tara tried to calm her daughter down.

“Let us call the school and ask them about Caroline, maybe then we can put these doubts to rest. The tattoo is a common thing nowadays. Everybody is getting a tattoo, it is the latest craze”, saying this, Shekhar picked up the phone to call Roohi’s school.

“It’s too early to call, I think we should wait for the assembly to get over before inquiring about Caroline”, Tara reasoned with Shekhar. Meanwhile she called in sick and promised Roohi that she’d stay home with her and Shekhar to keep her safe.

They went down to the kitchen and waited for Jennifer to get back. Shekhar cooked egg toast for Jenny and Roohi; Tara had a plain toast since she wasn’t feeling too hungry. They informed Jenny about Tara’s unexpected day off and Roohi’s desire to skip school and spend it with her parents.

“Excellent, that gives me a chance to go over to the Menon’s for a coffee, I have been meaning to visit them for a while now. They have helped me a lot in my time of need and I am grateful for their help and support”, Jenny sounded happy with this turn of events which made the Dattas doubt her involvement in Roohi’s kidnapping incident.

Shekhar waited impatiently for the clock to strike 10 before calling the principal. Tara and Roohi could see Shekhar’s face change color while he listened to the principal on the other end. The phone slipped out of Shekhar’s hand and fell with a thud to the floor. Tara and Roohi were startled to see him look so dazed.

“Shekhar, what happened, what did he tell you about Caroline? When did she leave this school to go to the boarding school in Shimla?”

“There is no Caroline in Roohi’s school, there never was. No student by this name was transferred out of school in the last twelve months”, Shekhar’s voice was shaking with disbelief and suppressed anger at his stupidity. How could he have let his guard down and allowed a stranger to come live with them? How could he have put his daughter in danger?

What had he done?

Read the next part of our story at Arpita’s blog.

15 thoughts on “Bards of the Blogosphere: Chapter 8 – Mysterious Tattoo”