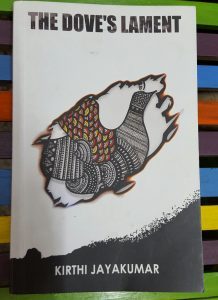 The Dove’s Lament is a journey that takes you around the world, bringing to life the human side of conflicts that tear people apart. From the genocide in Rwanda, to war-stricken Bosnia, from child marriages in India to prostitution and drug trafficking in Colombia, these stories traverse a microcosm of reality. Be it the manifestation of Bacha Baazi in Afghanistan, or the fight for paradise on Earth, Kashmir, the repertoire of stories lend a soul to what otherwise remain a muddle of news reports and statistics. Through these stories, Kirthi embroiders a tapestry of the unvanquished human spirit in varied shades, and shakes you up to the reality that surrounds you. 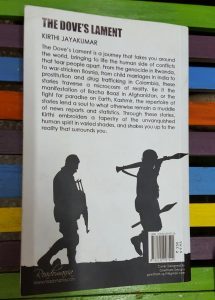 Kirthi Jayakumar is a full time nomadic dreamer. She wanders in search for peace, and on the way, writes a little to keep the fires burning. She enjoys her tenancy on Earth, and since like everyone else, she owns nothing, she believes in sharing, caring and living a life in love.

She is a writer, artist and activist. She founded and runs the Red Elephant Foundation and is the author of two books, Stories of Hope and The Dove’s Lament.

After reading the first story from The Dove’s Lament, I was convinced I couldn’t read any more of these heartbreaking stories. I cried myself to sleep that night and woke up thinking about the protagonist of the first story, Esther. She lived a hard life and her struggle to survive, along with her son, Habimana, moved me deeply.

Kirthi says, ‘This book is also an attempt to present facts through fictitious stories.’ There are short essays at the end of each story, to give us an idea of the harsh reality that inspired these heart wrenching stories. The twelve short stories are about the plight of the victims of the conflicts and their struggle to survive, their resilience and hopes of peace.

My friend had borrowed this book but returned it after a day stating the obvious, there was too much violence, blood-shed, trauma and tears in it. This got me thinking, instead of feeling sad and helpless on reading about the atrocities being committed on innocent people throughout the world, we could help just by listening to their stories, reading about their hard lives and spreading the message of hope, peace and resilience across the globe. This is what Kirthi had in mind and she succeeded in bringing the voices of the voiceless to us, we could either drop the baton or pass it forward, I decided to do the latter.

The longing and yearnings of the displaced people shines through the pages of the book. How much they miss the memories of growing up in their homes and cities.  Reading about their agony of leaving their homes and knowing they would never come back to the same was a numbing emotion. The story of a younger sibling sacrificing himself to protect his elder brother from being sold to the militants made me shed many a tear.

I have read Kirthi’s stories and they have left a mark on my soul. The stark brutalities committed on innocent and helpless victims, their terror filled screams and silent sighs, the helpless situations they find themselves in and their traumatized cries pierced my being. I found myself crying with them and cowering in fear with them when they were being hunted like animals. The stories of girl-children who were forced into child-marriages and then raped in the name of this holy union, made me sick to the stomach. Their untimely deaths didn’t raise many eyebrows in their husbands’ families, though their mothers’ berated themselves to no end, silently.

There is a fragile link between the stories -Habimana, the five-year old son of a young mother in Rwanda, both forced to run away from the only home they know, to save their lives. The mother’s thoughts and emotions are so vividly narrated that I shivered with her, prayed and cried with her. The story has a ray of hope in its bleak ending, a mother’s undying hope that is like a tiny candle lit crevice in a shattered and gloomy building.

The last story picks up from where the first one had ended and this glimmer of hope keeps the heart beating as a mother prays fervently for her son’s wellbeing. Kirthi has managed to infuse the stories with her particular brand of sensitivity. I loved these few lines from the last story; they add credence to my statement.

“She would swiftly pass her hands along the stalk, and in a single swipe, pull out all the leaves. And then as gently, she would run her fingers smoothly over the cadaver of the stalk, as if apologizing to the invisible maternal instincts in the twig, for snatching away its child.”- Kirthi Jayakumar